Plastic is a huge problem. 91% of all plastic is not recycled. Mass produced plastic has only been around for ~60 years, producing ~8.3 billions tonnes of plastic in that time. Of that, 6.3 billion tonnes is waste plastic and only 9% of that is recycled. The equivalent of ‘five shopping bags of plastic [waste] for every foot of coastline around the globe’ ends up in the oceans every year. In this ever growing plastic pileup, is there a way to remove it? Last month scientists claimed they had stumbled across an enzyme that could do just that…

Apart from trying to reduce the amount of plastic we use on a day-to-day basis and an increased effort to recycle (therefore preventing the waste pile getting even bigger), what is science doing to break down the plastic that is already out there? Plastics take ~400 years to degrade naturally. In the past, plastics have been burnt to remove them but this can release harmful gases into the atmosphere and increase pollution. Instead, scientists need to find a way to break down plastics faster than they do naturally, but without causing further damage. 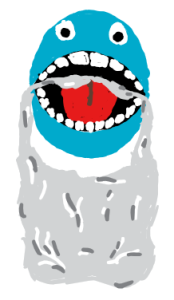 In 2016 scientists claimed they had found a Japanese bacteria which could ‘eat’ plastic. This bacteria was found, and thought to have evolved, at a waste recycling facility. Last month, the media went mad due to an accidental discovery made by a group of scientists from the University of Portsmouth. Whilst attempting to verify the Japanese bacteria claim, the biologist (Prof. John McGeehan) and his group, have ‘accidentally’ created a ‘super-powered version of the plastic-eating enzyme’. The scientists had been investigating the structure of the enzyme, altering various points to test the affect it had on the enzyme’s ability to digest plastic. In their tests they stumbled across a “super” one! The enzyme was able to degrade PET (i.e. a well known and commonly used plastic), at an increased rate with this structural change. Although PET is widely recycled, it is highly resistant to natural degradation.

(If you have a plastic bottle to check, it’s likely to be made of PET). The increase in rate of digestion was modest, but shows promise in that by altering certain parts of the enzyme it could be ‘tuned’ to increase the rate of digestion further. 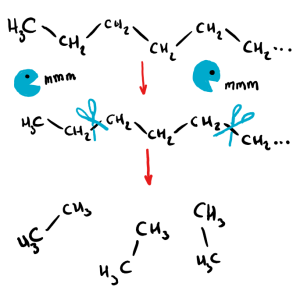 Enzymes are nature’s catalysts, providing the ability to speed up reactions in the body and elsewhere in nature. The enzyme discovered by the Portsmouth group can speed up the natural degradation of plastics. Plastics such as PET are made from long carbon chains, which vary in length. It is the length of these chains which lead to long degradation times. The enzyme breaks these carbon chains into smaller, more manageable chains. Although micro-plastics are known to be largely contributing to marine pollution, it is hoped that this enzyme (and variations of it) could form micro-plastics which would be more easily sorted and reused. Currently, larger forms of plastic are not as easy to recycle and reuse.

Dr Oliver Jones, an analytical chemist from the University of Melbourne, said “while there is still a way to go before you could recycle [a] large amount of plastic with enzymes, and reducing the amount of plastic produced in the first place might, perhaps, be preferable, this is certainly a step in a positive direction and very exciting science”. Overall this discovery, and future research to be done in this area, holds great potential to help reduce the volume of plastic currently polluting the earth. However, it is up to all of us to take charge and limit our use of plastic, in order to truly prevent this problem getting any worse.

2 Replies to “Cleaning up with Enzymes”