With NASA’s new InSight probe safely landed on the surface of Mars this week, it’s about time we did a post all about our big, red, next-door neighbour. NASA plans to send people to Mars within the next 20 years, so what does it have in store for them and what do we know so far?

Mars, at its closest to point to Earth which occurs every two years, is roughly 100 times further away than the Moon. We had our first close-up picture of the Red Planet in 1965, providing a strangely recognisable place but data different enough to challenge our perceptions of a habitable planet. Mars is strangely similar to Earth in that is has seasons, polar ice caps, clouds in the atmosphere, and volcanoes, amongst other features we have on Earth. However, conditions on Mars can vary hugely to those that we are used to on our Blue Planet, with an atmosphere of 95% CO₂ and an average temperature below -50 °C. Our main question is is there the possibility for life on Mars? Water. Water is key to sustaining life.

There have been previous missions to Mars which investigated its surface, studying canyons, volcanoes, rocks and soil. These probes discovered ice on Mars and other elements needed to sustain life, but no sign of current or past lifeforms existing there. This does not mean to say future humans could not live on the Red Planet, but there is still a lot to be understood before we send people to colonise. 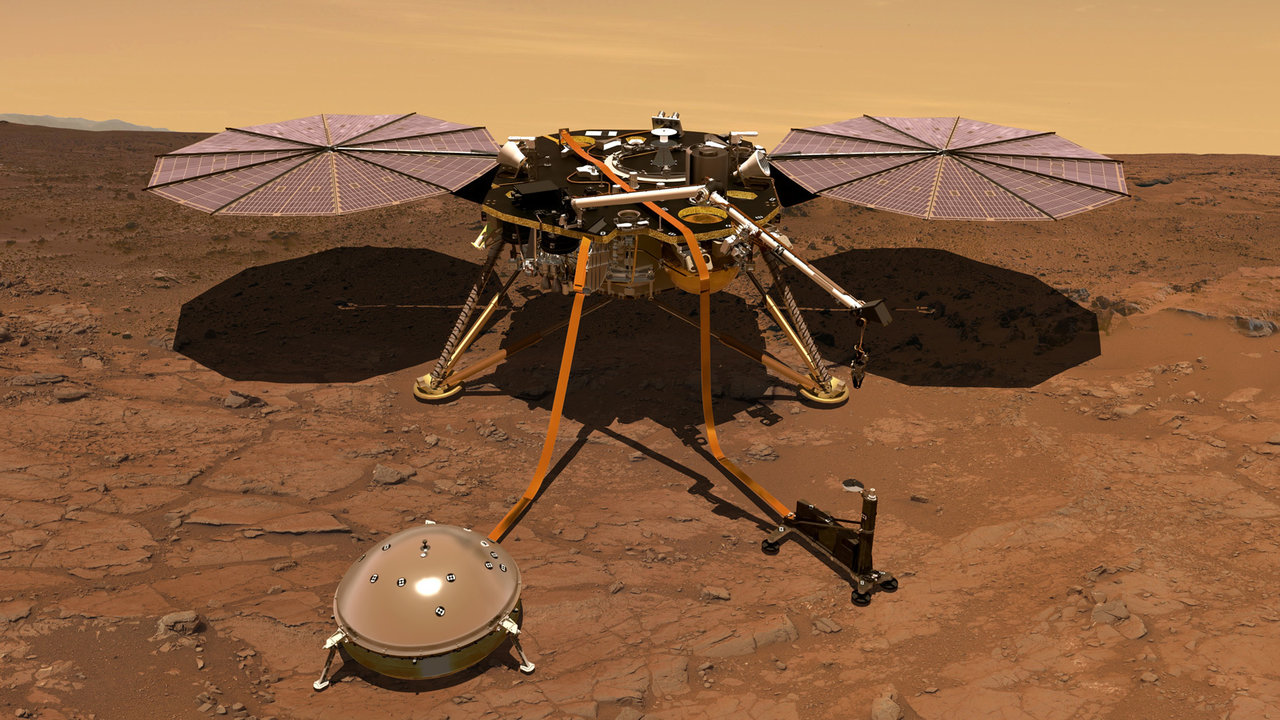 Above is an illustration of the InSight probe from the NASA website, LINK.

NASA’s InSight probe landed on Monday (26th November 2018) and is charging up after its journey started on 5th May 2018, totalling 6 months and 21 days of travel time. It is hoped that InSight will provide scientists with more data from the Red Planet to establish whether or not we could ever set up human civilisation there. NASA has calculated that for a human trip, with everyone on board, enough fuel and supplies, the journey to Mars could take around 9 months. But what do we need to know before we can go?

InSight aims to take the ‘vital signs’ of Mars, obtaining values for ‘pulse and temperature‘. NASA are calling it Mars’ first ‘check-up since it formed 4.5 billion years ago‘. To understand the planet’s formation, we have to study vital signs which are far below the surface of Mars. For example, on Earth we have earthquakes, on Mars scientists have detected ‘marsquakes‘. InSight has a seisometer (SEIS), which checks Mars’ pulse for such quakes. By studying the seismic waves that travel through the planet, scientists can deduce what causes them, with a current causation theory being marsquakes or meteors hitting the planet’s surface. Earthquakes and marsquakes may be very different.

Earthquakes mainly occur when tectonic plates move past, or over one another. These plates may snag along the way and once able to move again, the energy is released as a seismic wave, and we get the earthquakes we are familiar with. Mars however does not have a fragmented outer shell like the Earth, so what causes marsquakes? This is partly what NASA intends to investigate but likely theories are planetary cooling, magma pushing from the centre towards the surface, or meteors hitting the surface. Whatever the answer, these waves are a lot smaller than those detected on Earth, and NASA will use seismic wave information from Mars to map what the inside of the planet looks like. Seismic waves are reflected differently dependent on the material they come into contact with and by monitoring those differences, scientists can deduce a 3D image of Mars’ interior. Earth’s crust is constantly changing so we know little about the formation of our planet. It is hoped that by monitoring these seismic waves, and Mars’ more constant crust, we will be able to tell how the planet formed and learn a little more about our own in the process.

Mars’ temperature will also be taken. InSight will burrow into the planet’s surface, deeper than previous missions, and see how much heat is flowing out of the Red Planet. This will tell us if Earth and Mars are made from the same materials and, along with the seismic wave data, provide some idea as to how the planet formed/evolved. Another feature to be tested is the RISE apparatus, two radio antennas which monitor Mars’ wobble. Like the Earth, Mars wobbles on its axis slightly as it moves around the sun, and NASA wants to know by how much and thus, how stable it is.

Overall, this trip to Mars is mainly looking for data that helps us better understand how the planets have formed, and plug holes in the knowledge of our own planet’s history. The Curiosity Rover landed on Mars in August 2012, and is still provided NASA’s scientists with a plethora of information about the Red Planet’s environment and surface. It is hoped InSight will add to this data, and start to tell us a little about the history of our planets and their possible future. Getting humans to and from Mars is still a very difficult technological feat but, with the help of InSight and other probes, we may be a step closer.

Slowly releasing all my pent-up tension, starting with loosening my grapple, as these before-and-after pics show. Until I'm ready to stretch my arm out, my camera angles will be the same. Stay tuned though: every picture I take, I’ll send to #Earth here: https://t.co/tjr8tfaCg5 pic.twitter.com/OAOTeA6uwq

Above is one of the first images which InSight has sent back since landing on Mars. Image courtesy of @NASAInSight twitter, LINK.