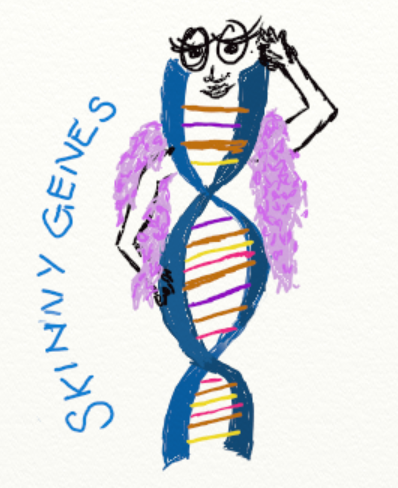 Last Friday (25th Jan) the media went mad for “skinny genes”, something in our genetic code which meant that people had a predisposition to staying skinny or becoming obese in later life. How much of it is genetics and how much is environmental?

Stories such as this make my scientist’s ears prick. Is it possible that we have genes which predetermine our future bodies? Surely it is nature and nurture, or are some people destined to become obese? More than 60% of adults in the UK are classified as obese, and as cases are rising, could there be more to it than diet alone? The findings which swarmed media came from research documented in the Journal PLOS Genetics. The investigation took DNA samples from 1,622 healthy thin people, 10,433 people of a normal weight (BMI between 18-25), and 1,985 obese people. Alongside DNA samples, the participants undertook lifestyle questionnaires to ensure that they did not have eating disorders or other medical conditions which could affect their weight. The main findings were that obese participants were more likely to have a set of genes linked to obesity, whilst “skinny” participants had fewer of these genes and also had gene changes which are possibly linked to “healthy thinness”.

The research was conducted at the University of Cambridge by Prof Sadaf Farooqi’s research group and the study was the first of its kind, looking at association between genetics and weight. The first line of the paper reads: “The variation in weight within a shared environment is largely attributable to genetic factors.” The professor used these results to claim that “we have far less control over our weight than we might wish to think.” She hopes this research could aid future weight-loss plans for patients seeking to lose weight more effectively and make a real change to their lifestyle. So what are these genes?

Within our DNA, sometimes simple alterations in a base pair can alter characteristics which the underlying gene is coding for, subtly or drastically. Eye colour is an example of this: a simple change in genetic code can lead to a variety of eye colours. This research shows that weight can also be influenced by such genetic changes. The group identified several common genetic variants which were already thought to be linked to obesity, but also found regions linked to severe obesity and others associated with “healthy thinness”. They haven’t yet pinpointed precise reasons as to why such genes cause obesity or “healthy thinness”, but have hypothesised that “obesity genes” may be linked to an increased appetite and interest in food, whilst “healthy genes” may aid an individual’s ability to burn calories faster.

Overall, the obese participants of the study had a higher genetic risk than the healthy thin participants, meaning that “the genetic dice were loaded against them” as researcher Dr Ines Barroso from the Wellcome Sanger Institute, said. However, it isn’t all decided genetically. If an individual with more “healthy genes” than “obese” ones eats only burgers and chips every day, and does no exercise, they will gain weight and be very unhealthy. Professor of nutrition and dietetics, Tom Sanders, at King’s College London welcomes these findings and does not doubt the presence of such genes, but added “most obesity is acquired in adult life and is linked to the obesogenic environment we live in”. With high calorific foods, sugary diets, and more entertainment which requires staying seated on the sofa, it is not surprising that obesity is continuing to increase worldwide. 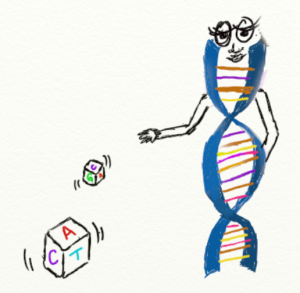 Whilst research such as this is very helpful in identifying the function of genes previously unknown, or aiding future diet plans to be tailored if an individual carries such genes, the media portrayal may be deceptive to those not reading further into the story. Yes, some people have a genetic predisposition for gaining weight and find it harder to lose it. However, this does not mean that everyone who is overweight has these “obese genes”, nor does it mean that it is an excuse for a highly calorific diet and no exercise. For example, someone with genetically bad eyesight (usually) will go to an optician and have it corrected, either with glasses, contacts or surgically. They don’t (usually) hope for the best and continue to get closer to their book, television, phone, car windscreen etc. until they can see properly. Just because you have genes which encode for such things does not mean that it is inevitable, and subtle twisting in the media can make you feel that way. The truth is, there are many reasons as to why people are obese, and research such as this is important in helping to better understand the worldwide obesity crisis, but the media needs to explain it properly.