Einstein is well known in both scientific and non-scientific worlds. Many know him for his wacky hair and clever mind, but my secondary school education certainly never touched upon Einstein’s cross, never mind his theory of General Relativity. So let’s break down Einstein’s cross and dust off those physics caps.

Light. We all learnt in school that it travels in a straight line, but part of Einstein’s theory of general relativity concluded that light can appear to curve in the presence of matter (i.e. heavy things). This can be observed when light emitted from a distant galaxy passes close to another galaxy on its way to the keen astronomer’s telescope. This effect is known as gravitational lensing. Much like the deviation of light rays seen when using classic glass lenses, gravitational lenses act like magnifying glasses which can change the size, shape, and intensity of the image of the distant object. Let’s break this down…

Gravity bends space and time. Gravitational lensing deflects light from a star/galaxy as it passes something that is massive enough (i.e. large gravity) to have bent space and time. This makes a star/galaxy appear offset from where it actually is. Depending on the initial alignment of the two light sources (e.g. white dwarf star and a galaxy), multiple images of the distant source can be observed. For example, four separate images of the same galaxy have been observed in the form of a cross (i.e. “Einstein’s cross”), as seen in the following image. This was spotted this year, and it is only the second instance recorded. Usually it is very difficult to spot a gravitational lens, because the separation between the images produced is normally very small, requiring high-resolution to see them. 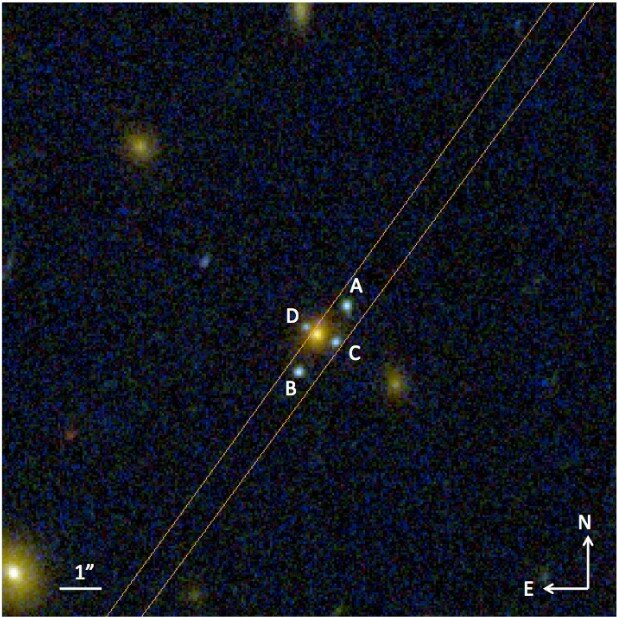 Let’s break it down further. Imagine light is a 1 mile long, single carriage train travelling through the Alps. The train comes to a mountain; It can’t go over it. It can’t go under it, and no-one built a tunnel so it must go around. Now we know that light travels in a straight line so the train itself is not bending, but the path around the mountain can bend. This is like the light from our distant galaxy travelling past another, more massive object; the object is so massive that it has bent space and time, meaning the light appears to have bent with it.

The following video is a great visualisation of how it all works.

So now this has sufficiently frazzled everyones’ brains, what do they use this phenomenon for? Another physics mind boggle is dark matter, and we can use gravitational lensing to detect it. If a galaxy causes gravitational lensing, we can calculate that galaxy’s mass by looking at the amount by which it offsets the light emitted from neighbouring galaxies/stars etc. We can then compare this to the expected mass of the galaxy by looking at all observable light which that galaxy emits. The difference between the calculated and the expected mass of the galaxy is hypothesised to be due to the presence of dark matter. Therefore, gravitational lensing is an important phenomenon which points towards the presence of dark matter.

Physics can appear confusing with all the theories, equations, and men with scary, uncombed hair but maybe we just need a few good analogies. Next time you look up at the night sky remember how much science there is around you.