Between 1957 and 1961, Thalidomide was prescribed to help mothers who were struggling with morning sickness. Soon after, 10,000 babies born across the Globe had birth defects. Drugs can be complicated, so how do we stop this happening again, and what other parts of science are affected in this way?

Isomers; these are compounds with the same chemical formula but a different atomic arrangement. They surround us from DNA to amino acids, forming every living thing on Earth. However, nature is playing a game, and we are still losing. Carbon atoms can bond with up to four other atoms and if each of these other atoms are different, it is called chiral. This means there are two possible structures for the chemical compound, (known as enantiomers (en-anty-oh-mers)) which are mirror images of each other. The best way to think of this is to look at your hands: they have the same components on each side but are mirror images of one another.

A problem occurs when there is this chirality in drug molecules: the two enantiomers may have completely different biological effects within the body. One may be beneficial, the other life threatening. A distressing example of enantiomers gone wrong is Thalidomide.

Thalidomide was prescribed to pregnant mothers who suffered from morning sickness from 1957-1961, hailed as a wonder drug which was able to prevent nausea and vomiting. Shortly after Thalidomide’s general release, 10,000 babies across the Globe were reported to have been born with malformed limbs, and only 50% survived as a result of their mothers taking Thalidomide whilst pregnant. The reason for the malformations was a racemic drug (i.e. a drug that contained more than one enantiomer). One enantiomer was responsible for reducing morning sickness, whilst the other caused limbs and some organs to not form properly when developing in the womb. Thalidomide was recalled and removed from prescription lists soon after, but this case is now used to highlight the dangers of using chiral compounds and not separating enantiomers correctly. 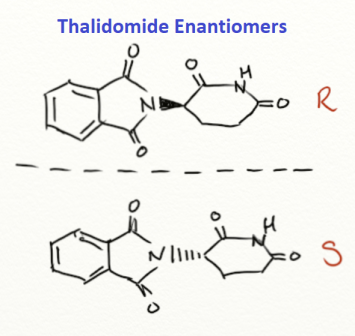 How can we ensure that we get only the right enantiomer? Enantiomers will have the same weight, boiling point, and melting point amongst other properties which could traditionally be used to separate compounds. Research has highlighted the use of some catalysts which are able to generate chiral biased reactions, creating only the desired enantiomer. Other methods involve forming diastereoisomers (i.e. compounds which have the same atoms but are not mirror images of one another), by reacting the problem enantiomers with other compounds; producing compounds which will have properties by which they can be separated. Research into ‘molecular sieves’ is promising separation of enantiomers without additional reactions, but this is still in hypothesis stages. Magnets could hold an answer though. The research was published earlier this year, and scientists discovered they could force the separation of enantiomers by using magnets. Results showed that electrons move through each enantiomer differently, meaning with a magnetic force only one would be captured at a time. 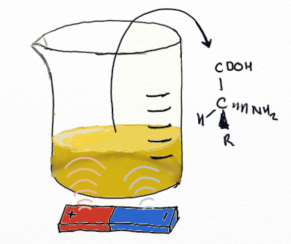 Chiral compounds aren’t always a pain in science’s backside. Amongst other applications, chirality has been harnessed to improve the efficiency of modern technology, in OLEDs (organic light emitting diodes) for example. Lots of devices with screens consist of many layers, including a polariser, which makes the device more expensive for the consumer and bulkier. A recent paper showed that by using a chiral molecule for the OLED, it is possible that the direction of emitted light could be influenced, and would remove the need for polarisers! Not only did my best PhD pal Beth Laidlaw (@beth_laidlaw) work on this research, but so did the BEM (British Empire Medal) holder, and #womeninSTEM legend, Dr Jess Wade. Such great work and an inspiration for girls looking at STEM futures.

We try to avoid chiral compounds where possible in drug design, preventing difficult separation steps after the problems incurred with Thalidomide. However, research is working towards overcoming these problems, so chemists could once more use chiral compounds without fear of possible adverse effects from the undesired enantiomer. Nature uses chiral compounds successfully every day, taunting chemists with its seemingly effortless ability to generate only the correct one; Nature 1, chemists getting there.