As many of you may know from my holiday snaps, I was lucky enough to have a much needed break from my studies to Thailand for a few weeks in October. We did many amazing things whilst we were there, but our visit to Elephant Valley Thailand (EVT) in Chiang Rai, Northern Thailand, was a dream come true. Prior to our visit, I contacted EVT to ask if they would mind me writing a blog about their work, and they gave us a discount for our visit in return, so I want to emphasise that before writing.

Before heading to Thailand we knew we wanted to catch a glimpse of Asian elephants during our visit, and after a lot of research, I found Elephant Valley Thailand. Their sister company (Elephant Valley Project, Cambodia), was established in 2006, and is still the only true elephant sanctuary in Cambodia, paving the way for EVT in Northern Thailand. Since 1989, more than half of Thailand’s 7,000 elephants have lived in captivity. This is partly due to old trades such as logging, but largely due to tourism; driven by those who want to ride, walk and bathe with the magnificent animals, with ~2,500 being ridden daily. Obviously, being ridden is not a natural activity for elephants and is very bad for their backs/shoulders amongst other reasons which PETA highlight superbly HERE. Over 1000 elephants are captured from the wild in Thailand, which is illegal, but papers are forged to say they were born in captivity which isn’t.

So how is Elephant Valley different? Jack, (a UK farmer turned elephant conservationist) visited Cambodia many moons ago. He learnt from the work done in Cambodia’s sanctuary, and aided the setup of EVT to show camps across Thailand that tourists will come even without the promise of elephant rides etc. EVT does not allow touching, riding, trekking or bathing with the 5 elephants they have at the sanctuary. This allows the elephants to relax and de-stress, get used to their natural habitat, and it’s safer for everyone visiting! Their conservation work focuses on behavioural development; a slow process of rehabilitation, which includes getting them to spend time with other elephants who know how to be elephants in the wild. Such role models are rented by the project, and exhibit natural behaviours for those being rehabilitated. Each elephant brings different traits to learn such as eating, washing, group life etc. In many cases the elephants have come from tiny enclosures, or areas where they have been chained and unable to explore. The elephants need to be taught that they have space to roam and graze on their natural grasses, rather than the fatty sugar cane they are used to in captivity. One of the female elephants had been on a very short chain before coming to EVT. When she arrived, the staff had to walk her around the sanctuary because she didn’t know she could. After being taken around, she spent the rest of the day walking the entire perimeter, a sight I wish I’d witnessed first hand.

Currently, EVT have 3 female elephants and 2 males living within 41 acres of land, which is immense compared to the road side enclosures we spotted on our travels in Pai (see below). After initial rehabilitation (which for the first elephant has taken 7 years), the elephants will be moved to a bigger site close by which is 11 times larger, taking them more into nature and further from human visitors, more like a safari visit. This site will have 5 main sections, teaching the elephants to migrate, be completely unchained and finally live herds. Once a herd is established, they will be taken from the second to third site (~4000 acres) which EVT hope to secure. Overall, this type of project takes a LONG time, but much better done slowly and at the elephant’s pace, than rushed and to put them or the staff in danger. 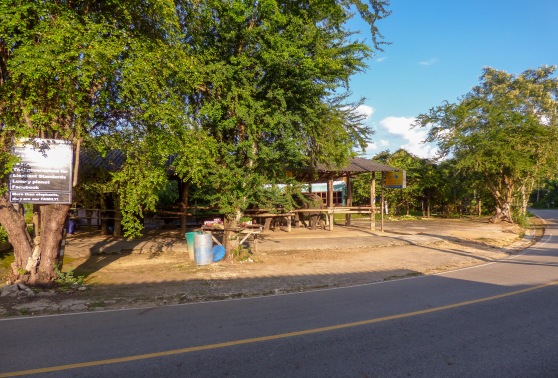 Above: a road side enclosure we saw during our travels of Pai.

Above: one of the male elephants at EVT, he was in musth (i.e. reproductive period/puberty) so kept on a long chain to protect staff, visitors and the female elephants!

The actual day at the sanctuary was amazing. We had a guide called JayJay who was a fountain of knowledge, teaching us about each of the elephants and adding so much to the experience. The project also employs locals and teaches them about the benefits of rehabilitating the elephants instead of using them for entertainment. JayJay gave us all the facts, including that elephants have ~250 words in their vocabulary mostly below our hearing range, leaving trumpets and squeaks as exclamation marks. We walked around parts of the compound, maintaining a good distance from the elephants at all times, watching them bathe from a viewing deck which was magical; a genuine experience, not a forced one. Later, we saw them being showered, which is necessary for the staff to check elephant health, and finally fed them some bananas before having lunch ourselves. The feeding is allowed if the elephants come to the feeding area, they can only be fed by tourists so they don’t learn to rely on certain staff as a food source, and after the food has gone, we have to back away so they know to go back to their grass munching.

We chose to volunteer in the afternoon, getting to see the second site development and chopping down banana trees (quite easy in theory but more difficult in the afternoon heat!) ready for the afternoon’s tourists to feed the elephants. Overall, EVT was amazing. The work they do there is fundamental to the health and well being of the elephants in Thailand. I hope they inspire and teach other parks to do the same across the country. I think the most important message is that tourism does not need brutality and cruelty to work. For ~£50 each (2000 THB) you can spend an incredible day with elephants which are treated well and rehabilitated, alongside knowing that you are contributing to the employment, teaching and development work with locals. Thank you EVT (Jack and JayJay in particular) for having us; it left us breathless.