Current renewable energy sources include solar, wind, hydro, tidal, geothermal and biomass, but could rain be added to this list as a viable source of power? A new breakthrough in research suggests a single rain droplet could be a great energy source if harnessed properly.

After the downpours and flooding we’ve had (for what feels like forever now) in the UK, harnessing the power of rain would be a welcome prospect. Research into accessing the power concealed within rain has been ongoing for a number of years, and finally there has been a breakthrough, as until now we have been unable to generate power from water droplets. We’re not yet producing umbrellas which double as generators, but we could soon get energy from rain at a level that would make this approach efficient and practical.

Using the new technology, one single droplet of rain generated enough energy to power 100 small LED bulbs, a jump in efficiency of several thousand compared to previous studies. The water (100 microliters) was dropped from a height of just 15cm, and generated over 140V, enough to power the 100 small LED lights. This has been published in Nature by biomedical engineer Wang Zuankai, and his group from the City University of Hong Kong. For perspective, it generally takes ~120V to power a standard lightbulb (in the US) so it’s a lot of energy from just one drop, and they found four droplets powered almost 1,500 small LED bulbs! How is it done?

Converting the energy of tides, waves or streams, where there is a continuous flow of water is simple in comparison to generating energy from a single drop. For example, tidal power converts energy from the rise and fall of tides (i.e. mechanical energy) to electrical energy, working along coastlines as there are usually two high and two low tides every day. For electricity to be generated, there must be a difference of at least 5 meters between high and low tide height. Tidal power is generated using tidal barrages (the most efficient method; a dam which utilises power generated as tides change, moving a turbine which in turn generates electricity), fences (operate like giant turnstiles) or turbines (like a wind turbine but under water); for both of these the tides move the turbine/turnstile which is connected to a generator to produce electricity. Tidal energy is more effective than wind energy as water generates more pressure against the turbines, subsequently creating more energy.

But how do you get energy from a single water droplet? The team created a droplet-based electricity generator (DEG) using a very thin plastic film (polytetraflouroethylene – PTFE), which accumulates an electrical charge over the surface as water continuously hits it until it becomes saturated (i.e. contains as much water as it possibly can). The droplet spreads out as it hits the DEG surface creating a bridge between two electrodes (i.e. something that can carry electricity). This bridge makes a closed-loop circuit. The water droplets act as resistors and the surface acts as a capacitor (i.e. something that can store electrical energy), so once the water has connected the circuit, the collected energy can be released. Why do water droplets have energy? You may have been taught that energy cannot be created or destroyed, instead it is transferred between types (i.e. the conservation of energy). For example, we convert the chemical (or potential) energy in our food (measured in kJ) into kinetic energy, to move around. Therefore, this new technology is transferring kinetic (potential) energy of a falling raindrop, to electrical energy we can use to, for example, power our devices. 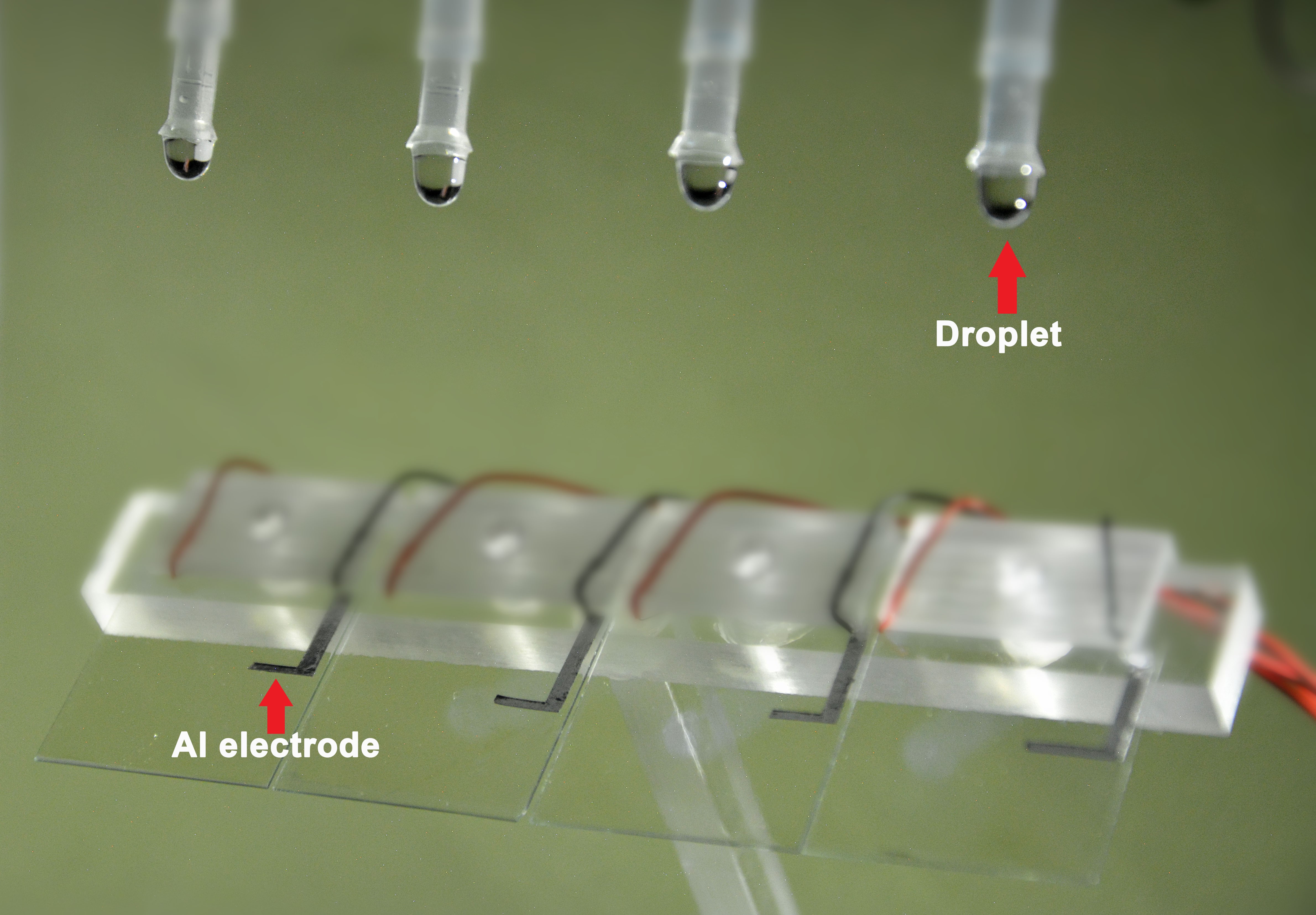 A close-up of the generator. IMAGE: Wang et. al./City University

This technology could be applied anywhere water hits a solid surface (e.g. windows, umbrellas, cars, boats, even inside a water bottle). The enhanced power from each droplet, which has been possible with the above technique, means a device using this would be extremely efficient at converting the energy from falling water to electricity. Obviously this technology is in very early stages, but the team hope to have a full prototype in the next five years. Within our lifetimes we could harness energy from another weather condition; something wet countries, like the UK, could make great use of.

One Reply to “Rainy, Energy-Filled Days”